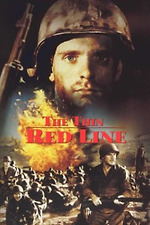 I find it so funny that, in 1963, James Jones wrote an article titled ‘Phony War Films’ where he claimed that contemporary war films were cheesy, heartless and utterly unrealistic. And then literally the following year, this adaptation of his extraordinary and progressive novel is released, and encompasses all that he publicly disdained in that article. It’s just a disservice to the life and work of an incredible veteran and author, as well as to anyone who seeks it out in the hope that it is anywhere near as moving as Malick’s masterpiece, because it certainly isn’t.