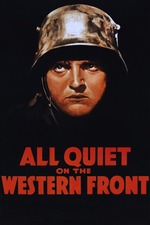 Without a doubt one of the most affecting WWI films ever made, and arguably one of the finest of the war genre as a whole. So much of this is visually impressive — the immaculate compositions, the chaotic and gritty battle scenes, the claustrophobia of the trenches — but the sound design is even more deserving of praise. Given the novelty of sound film, the sound design is impressive in how it evokes combat, particularly with each shrill whistle before a bomb drops, and the subsequent low rumble of the impact, which cuts right though you.

But this also works so well as an anti war film in the way it tackles so many avenues of misperceptions of the war. The focus on the individual soldier, and the psychological impact of going to war is hugely compelling, and the presentation of exhaustion, both physical and mental, as the result of such extreme exertion, is incredibly moving. How many films show soldiers as such weak men? How many completely neglect the notion of the “war hero”?

A lot of this is down to the performances, and the subtle actions made by the actors to tune the viewer into these very profound psychological aspects of warfare. I think Lew Ayres’ performance as Paul Baumer may be one of my favourites in any film, war or not. There’s just something about his innocent, childish face and his enthusiasm prior to the war that contrasts so heavily with his ability to present unhinged fear and utter tragedy. He often tries to act manly but can barely hide his fear. It’s such a human performance; he’s just defeated, full of despair. Few films hit this hard.

His performance is the core of a film that isn’t really concerned with WWI as a slice of history, or with a specific army, or any grand statement beyond the fact that war is ruinous for the individual soldier. It’s damning and impactful and somehow often neglected in the discussion of the war genre.

“You’re just a man like me, and I killed you.