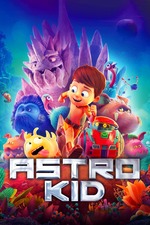 Éric Tosti’s science-fiction animation follows the adventures of a little boy who must survive on an explored planet when he gets separated from his parents during a space mission.

Succeeding the annihilation of their boat, William is detached from his parents with whom he journeyed in space. His extra capsule lands on a wild and unfamiliar planet and has to exist with the assistance of Buck, a survival robot.

Landen Beattie gives a good voice performance in his part as William, the young boy determined to get back to his mother and father, while also getting more than he bargained for on the explored planet.

Elsewhere, Jason Anthony is decent as the robot Buck, while Laura Post and Keith Silverstein are both respectable as William’s mother and father, with Keith also voicing the role of Game Robot.

The direction from Tosti is good because he allows the facial expressions to be seen to a strong effect throughout, while also keeping a mostly pleasant atmosphere happening as well and the script is written to a decent standard by the director, David Alaux and Jean-François Tosti as they make the movie fine to follow.

The camera stands out best in terms of the technical aspects, because it makes good use of the locations and also captures the tense moments well, which get the edge-of-the-seat status.

Overall, it is not outstanding, but Astro Kid is an enjoyable science-fiction animation, due to the good voice performances, direction, script, mostly pleasant atmosphere and some tension.