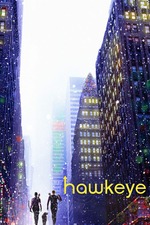 Finally Hawkeye has the attention he deserves.

The first episodes I think are pretty good to establish who Kate Bishop is. And you know, I’m happy to say that I cared about her because she’s not your stereotypical fangirl character. She looks up to Clint Barton for a reason. It’s cool that it’s the same reason why I liked Hawkeye since day 1 (Seriously, I was the “Hawkeye is his favorite Avenger” kid, gotta be one of my favorite genders). Kate is charming, stubborn, loyal and MAKES A LOT OF MISTAKES. Not stupid mistakes like Tom Holland’s Peter Parker but like actual understandable mistakes. So yeah, I wanna see more Kate Bishop.

The series really dug a lot into “Hawkeye is the most human of the Avengers” thing and I think it’s appropriate since that’s pretty much the elephant in the room. You see this guy fight alongside literal gods agains universal level threats and he is just pretty good with the bow and arrow but still manages to be a key part of the team. Here you see him at his most vulnerable state, both physically and spiritually. He doesn’t even think of himself as a role model contrary to what Kate thinks, and that’s something that makes me say “THAT’S EXACTLY WHY YOU ARE ONE!”

And hey, do you wanna know how good the action is? There’s like a 2 minute long one shot in a car with both Hawkeyes being chased and it works. It’s that good.

I gotta talk about the ending tho. Without spoiling anything, I’m just gonna say I really hope they’re not dead and we’re actually getting more of them in the MCU. Otherwise I’ll take it as Ralph Bohner 2, which was one of the worst things Marvel Studios has even done to their fans for absolutely no reason.

I give this a Lady Arrow/10