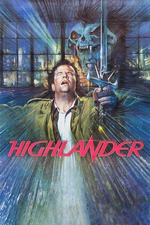 A film I saw so often on VHS as a kid is quite different as a grown woman, let me tell you. I remembered how goofy it was but was kinda charmed by how earnestly romantic it was, too.

An unironic Queen Instrumental during a steamy 80s NY skyline-silhouetted sex scene! And the sex itself is just gentle kisses on different body parts, how adorable!

The Prize at the end is fucking hilarious: "Eye can read the minds of everywan in de world.... presidents... diplomats... scienteests... I can make the world a better place..." lmao good luck McLeod, I say from a dystopian future actually worse than Highlander 2

The far away shots with stunt men are quite funny cuz there's a noticeable uptick in speed whenever it's them. They kinda make up for it with the fantasy elements added in when the actors are doing their slow/clumsy moves tho, you gotta love the operatic panache of Clancy Brown and Sean Connery tapping at a castle wall and it fucking disintegrates while a guitar solo plays and lightning strikes.

The women are such hilarious damsels, it coulda been made in 1942 with just a few edits for sexual content! My god his highland waifu was a babe... the modern waifu falls for him the MOMENT she learns the truth about his immortal status. I mean I get that she was a fan of metallurgy, but...???

Anyway, A Kind of Magic/Princes of the Universe/Live Forever are all-time bangers and it's wild they're all from one movie.