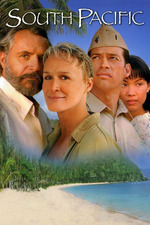 The choice to scale up the age of Nellie Forbush to allow her to be played by 50-something Glenn Close was one which could have backfired on the makers of this update; it is to her credit that she performs and sings in the role very well.

As Emile, Rade Sherbedgia is perhaps a little too high-voiced for the demands of the songs, but his portrayal of the lonely islander is touching and effective. As Bloody Mary, Lori Tan Chinn looks more like the part of the greedy trader than did Juanita Hall in the 50s film, and her singing of Bal'i Ha'i is excellent.

I did miss Happy Talk, which is omitted completely from this version, but the songs that remain have been arranged with style and come across very well (particularly This Nearly Was Mine, Younger Than Springtime, and I'm In Love With A Wonderful Guy).

Harry Connick Jr. completes the main cast as young Lt. Cable, resembling and sounding like a young Sinatra. The character continues to be totally unsympathetic but he is better overall than John Kerr had been in the earlier version. I don't think this film is bad at all, despite the numerous negative comments I have heard: it is perhaps more realistic than the colour-filtered world of Joshua Logan's film, but perhaps that new slant is for the better.