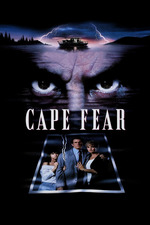 this epic thriller managed to make me sweat and i like it. my only problems are that i don’t understand why they had the fever dream effects in it. also felt as if Cape Fear was originally gonna last a bit longer but they cut some scenes out to make the story more about Cade focusing solely on Bowman, which i understand.

beginning scene is one of the best things i’ve seen and i can’t take it seriously anymore. Max Cade for all the scum he is, well, he also is an amazing villain portrayed brilliantly by Robert DeNiro. probably one of the best villain portrayals i’ve ever seen in film. i’m also a big fan of the swooshy and super-duper close-ups style the cinematography and editing had. Cape Fear is as energetic as it is nerve-racking.