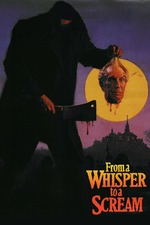 From a Whisper to a Scream

Finally watched this film that I always knew as The Offspring.

Some Kind of Heaven