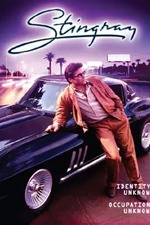 Stingray premiered in 1985, one year after the debut of NBC's massive runaway hit, Miami Vice. It sure feels like Vice's sillier, immature, younger sibling trying too hard to act and dress like big brother. It also lacks Vice's impressive music budget. What you get is a flashy and vapid show full of neon and synth tunes that looks and feels exactly like a modern parody of '80s style.

In other words: totally awesome. In fact, it's appropriate that the villain in the pilot is played by former Miami Vice Metro-Dade Police lieutenant (and predecessor to Edward James Olmos's Martin Castillo), Gregory Sierra. (Sadly, Sierra just died earlier this year. I was amused that his character lived in the Frank Lloyd Wright Ennis House from Blade Runner.) The pilot episode also features a car-jumping-onto-a-boat stunt 18 years before a very similar stunt occurred at the end of 2 Fast 2 Furious. I especially like how Nick Mancuso's C2 'Vette is just a normal car, with no talking computer, laser beams, or turbo boost typical of high-tech TV vehicles of the time period. Yup, those sure were fun times.