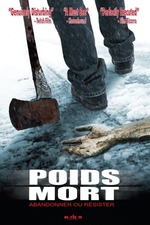 A film obliquely tackling position and privilege in a unique setting. It’s always disappointing when a filmmaker chooses to center the privileged, usually white character and choose to tell the story from their point of view instead of the people of color that barely get represented in the first place, which is the case here, but thankfully we spend a good amount of time with the Filipino seamen who get to be rounded characters with complicated motivations. Manuelito Acido (James) immediately makes you care for him the moment you see him, and does a good job in the number of minutes he is on screen. Archie Alemania, who I suspect is the only professional actor among the Filipino seamen, is great as the wronged, grieving friend. I particularly loved the moment he shouted (in Filipino) ‘Pag di mo ginalingan hahampasin kita nito!’ or something like it to the foreign Captain. It captured exactly the anger, the grief and the laughing it out to cope. Tommi Korpela was good in that same scene.
As usual there are awkward lines written by a non-native speaker of a certain language that only native speakers will notice.
The film does end strongly, with a nice trick&reveal and letting the audience fill the gap for themselves.