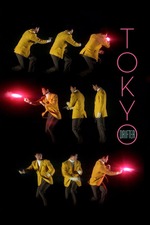 To think that this film was made in 1966 is really all the proof we need of both it’s staying power, as well as its influence. When it comes to style, this film has it in spades. There’s no doubt that it had a profound influence on folks like John Woo, or on James Bond films. Seijun Suzuki was FAR ahead of the curve with this one.

Tetsuya Watari plays Tetsu the Phoenix, a former yakuza who is on the path to going straight. His boss, Kurata (Ryuji Kita), has a building that is sought after by another yakuza boss, Otsuka (Eimei Esumi). Tetsu decides to drift around Japan, leaving his boss and the girl who loves him, Chiharu (Chieko Matsubara), though it’s quickly established that he can’t escape as well as he would have hoped to.

As Tetsu wanders, the film takes us through many wonderful landscapes. From neon lit streets to snowy countryside, the visual style is so undeniable and lovable. The actual camerawork is just pure fun to watch, darting around and zooming in on faces and small details. A major scene, with a fight in a cabaret club, is just a blast to watch. There’s such a depth to the story, and it’s complemented through incredibly detailed camerawork.

Jazz really adds to the atmosphere here, as well. Think of what would be in something like Cowboy Bebop if it weren’t for the jazzy action of Tokyo Drifter. The fight sequences that take place with the jazz music in the back are just a joy, and never feel repetitive. The style that this film is known for really permeates every level.

This is such a fun film, and a quick watch too. Clocking in at under 90 minutes, it never lets up or feels like it’s dragging. The story of Tetsu is as cool as it gets. There are plenty of action film characters, but how many can rock a powder blue suit in the way that Tetsu does?