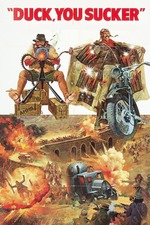 Sergio Leone, once he really found his niche, cemented his place as one of the greatest directors that had ever lived. From A Fistful of Dollars to Once Upon a Time in America, he has an absolutely indisputable filmography. A Fistful of Dynamite, or Duck, You Sucker, or Once Upon a Time... The Revolution is likely the most underrated of the bunch. With Leone not even wanting to be the original director, he managed to make yet another enjoyable as hell classic here.

Set in the early years of the Mexican Revolution, the film follows Juan Miranda (Rod Steiner), a local bandit, his family, and John Mallory (James Coburn), a former IRA explosives expert on the run from the British government. Over the course of the film, as Juan seeks to become rich, he becomes part of the ongoing revolution. The duo of Juan and John is wonderful, and so much fun to watch. There’s a similar energy to Blonde and Tuco from The Good, The Bad and the Ugly, just with way more dynamite.

The signature style that Leone is known for is here in spades. Some of the coolest closeups from his filmography are on display here. One shot, early in the film, has Miranda looking through a hole he’s torn in the poster that has the governor’s face on it. The eyes line up perfectly, and it feels as though he is looking at the reality that Governor Huerta has placed on the people of Mexico. He sees soldiers line citizens up against the wall, and shoot them. Leone’s belief in dynamite may have been what he said he believed in, but shots like this show what he has to say, without words.

The reason I watched this today was because of Ennio Morricone’s death. Just as this film is great, and simultaneously underrated, Morricone’s score here is as well. It might not be as extensive as his work on other Leone films, but his work here really underscores some great scenes, and adds to others. The refrain that exists through the film is really fun, and works well to punctuate the dialogue. Even with this being much quieter than other Leone/Morricone outings, it’s still lovely.

This film holds its own in Leone’s catalog. The story is so enjoyable, the dialogue is witty as hell, and the ending is incredible. There’s really something for anyone who is even remotely interested in a western/movie set in the Mexican Revolution. I hope I don’t go as long between this watch and my next, as I did between my last and this one.