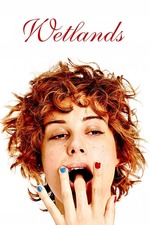 At the center of the movie we have Helen, a young woman obsessed with her bodily fluids, waging a war against everything she's been taught by her parents. She expresses her frustrations by using her body as an experiment against hygiene, sitting in every dirty toilet she can find or probing every orifice in her body just for the sake of it. David Wnendt, the director, has some fun with the ridiculous nature of it all. He shoots kinetically, using the camera to simulate Helen's restlessness, and stages even the grossest moments with sleekness and a playful eye (Look out for scene combining pizza, Strauss' The Blue Danube, and ejaculation to hilarious effect). Wetlands's intent is to shock you, to make you laugh and look away in horror at the same time, and in that respect it succeeds where this year's Nymphomaniac often failed.

But Wnendt has much more in mind. The film's most impressive feature is how it sneaks in the substance of the story while lulling the viewer with its self-conscious style. Images that at first seems to serve no other purpose than to look cool, keep coming back again and again. Each time, they are slightly altered, closer to their true form. Eventually it becomes clear that those images are a representation of Helen's psyche. With each manifestation she's pulling a layer off, allowing us to get closer to the truth.

The movie is rambunctious and irreverent and frankly it's not for everyone, but the way in which it proposes the inseparable nature of body and soul, with the former often bearing the bruises of the latter, is quite affecting. What starts out as a gross out comedy digs deep into the ways in which the emotional violence that parents sometimes inflict on their children, often inadvertently, shapes the lives of the younger generations for years to come. What Wetlands proposes is that the only way to heal those scars is to deal with them directly. Helen's treatment of her own body is not ideal, but at least she comes to recognize the root of her own damage: that's preferable to emotional repression for the sake of presenting a clean exterior.