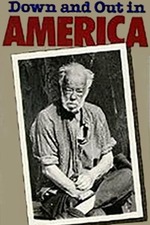 "To me, we better redefine violence. Because, to me, it's violent to put people on the street."

Lee Grant is one of my favorite people in Hollywood. Oscar-nominated for her first film role in Detective Story, Grant was soon after blacklisted from Hollywood for a decade for refusing to testify against her husband before the House Un-American Activities Committee. She didn't let the fuckers keep her down and went on to kill it in such classics as In the Heat of the Night, Valley of the Dolls and Shampoo. In 1986, while Reagan was touting the success of his trickle down economics, Grant made Down and Out in America, a no-holds-barred look at the failure of capitalism to provide basic human needs to people in the wealthiest country in the world. As one human rights lawyer Grant interviews in the doc says, every homeless person's path to homelessness is unique, made up of many personal tragedies and disasters. Going around the country and speaking to the homeless and near-homeless, many of whom find themselves in the gutter for no reason other than bad luck, Grant offers these forgotten men and women an outlet to tell their stories to an HBO audience. It's not so much an explicit political critique than an urgent emotional plea that asks the viewer, "How can we let this happen?" The next time someone tells you how cool Leonardo DiCaprio is because he tweets about climate change sometimes, you should respond by pulling up Lee Grant's Wikipedia page to remind them what a real Hollywood badass looks like.