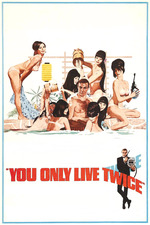 The first in the Bond series that I did not really connect with, as until this point, everything else had something in its favor. All are light and campy (Thunderball more so), but a solid and engaging plot underpinned them and built a good foundation. You Only Live Twice is comparatively thinner there, a film where one should not think about it too much or else it will reveal how little of it makes sense. This could work (see: Thunderball) if only the rest were any fun at all. Unfortunately, with Sean Connery having one foot out of the franchise and diminishing returns overall, You Only Live Twice ends up as a tired imitation of itself and an overall underwhelming experience. There are some strengths still, from Connery to the great gadgets and the first appearance of Blofeld (Donald Pleasence), but You Only Live Twice nonetheless falls short.

Other Bond’s succeed in being so overwhelmingly charming and light on their feet that one does not notice the gears turning. Nor are the sexism and racism so overpowering that one is constantly taken aback by how horrible these people can be. Unfortunately, You Only Live Twice is held back by this, right down to Connery being “turned Japanese” in order to fit in with the ninjas who help him. The women here largely take a back seat, used as decoration as they run around in bikinis serving men - because, remember, “women come second” in Japan… - as opposed to the rather strong women (who are objectified, yes) that are given more to do in some of the more successful Bond’s. It is a sexist series in general, but You Only Live Twice really does dial it up a notch. Furthermore, Bond himself is never really all that charming. Connery is exhausted, going through the motions with his quips less quippy and his puns flatter than ever. Flirtations are dry while screenwriter Roald Dahl revisits greatest hits from the series with their less funny counterparts - Connery’s martini bit replaced by one about sake here - to the film’s detriment. Without this charm or style, You Only Live Twice is left only with unsavoriness. Oone knows what to expect from a Bond film and some flirtatious back-and-forth or Bond being undone by his love of women comes alongside that sexism in equal measure. Here, as attention turns to Blofeld and international warfare, that rapport is long gone.

It is a rather kooky plot that unfolds, one that is certainly best left unthought about. There are spacecrafts and ninjas, as well as secret lairs built into dormant volcanoes and a piranha pool that gets used rather frequently. Bond flies in a crazy aircraft to get some photography of the volcano, learns how to be a ninja, and has a sham marriage as well. Deeply indebted to nuclear fears of the time, it is no wonder You Only Live Twice would focus itself on putting the world on the brink with Bond the only man able to avert nuclear holocaust. The stakes are quite big here, even if how one gets to that point makes no sense - especially in how that would benefit Blofeld, everybody in the world would be dead you moron - and do provide some excitement and tension. You Only Live Twice embraces the absurdity of every implication from spaceships eating other spaceships or the reality of having a base inside of a volcano. It is a generally flat film on this front, never really capturing one as its predecessors had done but there is enough going on to keep the action moving. The ninjas are a fun addition at least - even if nonsensical and rather ineffective - while Pleasence dominates the screen as Blofeld, giving a sinister edge to a character of great lore within the franchise. Nonetheless, You Only Live Twice’s slipshod sense of humor is just one area where it is less fun as even the gadgets and goofiness of the plot have a malaise over them, never quite hitting the right notes.

After being quite entertained by the Bond series so far, You Only Live Twice was a disappointing experience. It is not awful and retains some of the light entertainment qualities of the series, but the returns are certainly diminishing. Sean Connery having one foot out the door certainly does not help as one can really feel his disinterest. Outlandish as it should be and filled to the brim with gadgets, You Only Live Twice leaves little room for genuine plot or thrills. The end result is a middling work that has appeal, but not enough to outweigh its flaws.