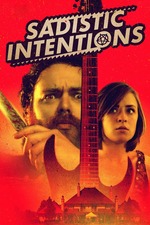 Like so many other people nowadays, I can often spend more time deciding what to watch on various streaming services than actually watching the movies. Thankfully, I saw that Sadistic Intentions had a main role for Jeremy Gardner. I have mentioned my love of Gardner before, a number of times, so nobody should really be surprised that his inclusion made me feel safe in deciding to give this a watch.

The main premise is simple enough, initially. A young man (Kevin, played by Michael Patrick Nicholson) sets things up so that he can get two people stuck at a fairly remote house. One of those people is Stu (Gardner), a musician ready to enjoy a noisy jam session. The other is Chloe (Taylor Zaudtke), a young woman who has been lured there by the promise of a good deal on some weed. Although two people are in the house, and one person is waiting to make their appearance, it's Chloe who seems to be in the most danger, and the one most oblivious to the fact that she's being toyed with.

Written and directed by Eric Pennycoff, his feature debut after writing and directing a few shorts, Sadistic Intentions is an enjoyable, if familiar, journey through some dark comedy and twisted moments. Gardner and Zaudtke work well together, and the first half really delivers some surprisingly uplifting and sweet moments as you see their two characters learn about one another and seem to find some unexpected connection. It's a shame that the second half goes off in the direction that it does. Although it's still fun entertainment, it also undermines the good stuff that was already developed.

The best thing that Pennycoff did was assemble the right cast. This is essentially a three-hander, and with only two of those three onscreen for most of the first half. Nicholson is a lot of fun when he finally appears, but the performances of Gardner and Zaudtke are the strong foundation of the whole thing. They work with a script that seems custom-made for them, and I'm not sure how much, if any, of the final product was a more collaborative experience than most movies, and they keep you on their side, sort of, even when things start falling apart.

If you're looking for the obvious signs of independent movie-making then they're all here. Pennycoff doesn't hide them away. All set mainly at one location. A film based more on dialogue than any spectacle. Attempts to use formulaic material and give them a bit of a twist. The presence of Gardner (at this point, I'm considering him the younger Larry Fessenden of the film world, and Fessenden also has a tiny role here). But I'd rather someone had faith in their material than tried to cover it up with distractions, or extra bells and whistles costing money that could be better spent elsewhere. Pennycoff has that faith in the script and performances, and he's right to have it. This may not be one that you remember years down the line, but it's a good time while it's on, and Pennycoff is someone well worth keeping an eye on.