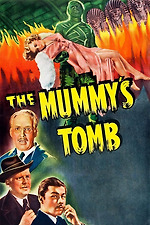 It’s called The Mummy’s Tomb, but if you’re really trying to tell one mummy movie from the next, think of this one as The Mummy Comes to America.

Because Universal’s mummy pictures can easily run together.

“Tomb” gets shambling along via stock footage and flashbacks, consolidating The Mummy’s Hand in 10 minutes. Maybe the only justice it needs.

Turhan Bey is the mummy’s director here, the only dude remotely descended from people of the Middle East to play such a character in the series. The film tints a very Asiatic quality to Bey.

On the plus side, much earlier and more mummy action due no doubt to Lon Chaney, Jr. picking up the shroud. He’s certainly a less svelte mummy.

It all goes well for Bey until he decides to take the girl for himself.

Still, this gets the mummy to Mapleton, Massachusetts, where he’ll stay for the next flick.