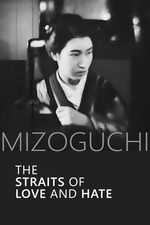 Made at the Shinko Kinema studios, Straits of Love and Hate/Aien Kyo (1937) was based partly on a work by Kawaguchi Matsutaro, a Shinpa tragedy writer and performer. It also encorporates Tolstoy’s Resurrection, a much read book in Japan, and was scripted by Yoda Yoshikata, who was to become Mizoguchi’s regular scriptwriter, here working on his third Mizoguchi film.

Rarely seen, the film is in need of restoration. With very sparing use of close-ups and quite dark settings with indistinct figures it can be sometimes hard to follow. The viewer has to work, but careful attention is well rewarded! As other Mizoguchi films from that time have been lost, we are lucky to have it at all.

As often in Mizoguchi’s career we have a tale with elements of Shinpa melodrama. Ofumi, a servant at an inn in the Northern province of Shinsu, is impregnated by the inn-keeper’s son Kenkichi (Shimizu Masao) with whom she is temporarily infatuated and forced to elope in the face of family, especially paternal, disapproval. Kenkichi, however, proves to be a hopeless breadwinner, and Ofumi is forced into prostitution to care for the new baby. Kenkichi lacks the character to stand up to his father who visits, and returns home.

After a period as a waitress and turning to drink, while using a wet nurse to care for the baby, Ofumi joins a troupe of comic Manzai travelling players in which she strikes up a relationship with fellow performer Yoshitaro (Kawazu Seizaburo)….

Aien Kyo continues Mizoguchi’s interest in theatre. And as elsewhere (e.g Story of the Late Chrysanthemums) the theatrical performance bears relation to and comments on offstage events- later in the film, the watching Kenkichi is filled with remorse. His voyeuristic peeping is a common feature of Mizoguchi films, here reminding me of the final shot of both Street of Shame and Mizoguchi’s career.

I admire the daring formal devices, which to me more than compensate for any loss of close physical association with the characters. At times, we are placed almost as documentary fly on the wall observers looking past people in the foreground and characters with their backs turned.

I’m also very taken with the smooth camera movement, the beauty of compositions, the lovely wintry settings, and not only the film’s sounds but also quieter moments, creating an atmosphere that is natural and yet distinctive..

Following on from the experiments in deep staging in Osaka Elegy and Sisters of the Gion the previous year, Aien Kyo makes remarkable use of different planes of interest, with comings and goings in foreground and deep background, for example in in the scene in which Kenkichi is conversing with the troupe manager, they leave and the distance reveals a further room from which Ofumi and Yoshitaro emerge

There are beautiful moments of stillness, wisps of steam reminiscent of Ozu and the more recent masterpiece Maborosi in which, like Straits of Love and Hate, close ups are few and so all the more precious. At the time of making the film, Mizoguchi disliked close-ups but later appreciated their value.

Yamaji Fumiko gives a very striking and convincing performance, her first for Mizoguchi, as Ofumi. Shindo Kaneto, a young Art design assistant on the film, went on to a long career in directing, most notably Onibaba and Naked Island. Still going strong today as director of Japan’s latest Oscar “foreign film” nomination, he was so impressed with Mizoguchi’s work and transformation of the actress, he became what has been called a disciple of Mizoguchi, later made a film about the great man.

Whereas Kenkichi is a typical weak and vacillating Mizoguchian male (others, especially fathers, are often oppressive), Ofumi has spark; by the time she meets up with him later in the film, toughened by her experiences of hardship, she can call the shots. At one point, he is remorsefully and haplessly kept waiting for her reply as she calmly taps her cigarette before smoking. Mizoguchi heroines are certainly not all shrinking violets or self-sacrificing angels, but often strong, resilient and here, as in The Love of Sumako the Actress, My Love has been Burning and the memorable ending of Osaka Elegy, also spirited and independent.

Kenkichi however comes across as quite an anaemic character- maybe a weakness of the film, as maybe with one or two others by Mizoguchi, is this relative lack of colour to the central performance as a feeble and unreliable male.

Yoshitaru is a stronger and more grounded personality. His attack on Kenkichi is apparently not the result of vulgar jealousy but selflessly encouraging Ofumi to return to the father of her child, and likely security. But it turns out the respective weakness and faults of Kenkichi and his snobbish domineering father have not been dispelled.

In Tolstoy’s Resurrection the male central character whose initial impetuosity causes difficulties for a young woman, has a greater nobility than Kenkichi. Mizoguchi had a less rosy outlook on the potential ideal humanism of the upper and richer classes. Here, the film’s ending i think strikes some sort of balance between regret over lost possibilities and an undaunted front in the face of a testing future. We are left with faith in the heroine.