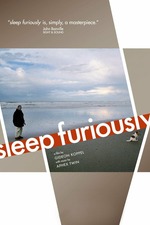 Sleep Furiously is a documentary that's something of a labour of love for Welsh rural way of life in a changing world. Liverpool-born director Gideon Koppel is the son of Jewish refugees who settled in the Trefeurig community, consisting of a few villages/hamlets in West Wales, where he was brought up as a child. His father had been a well-known painter in South Wales, and his mother appears in the film.

Although not far from the main route to the sea for holidaymakers from Birmingham and the English West Midlands, Trefeurig is quite off the beaten track, in one of the least populated patches of England and Wales. This is not a film the Wales tourist board might come up with; it concentrates on the simple daily lives among the relatively austere, often bald hills, rather than more spectacular and crowd-pulling spots like the waterfalls at nearby Devil's Bridge/Pontarfynach, or the coastline. Nor do we see the abandoned nearby lead and other mineral mines. Oh, this is the area too of the great (Welsh language) medieval poet Dafydd ap Gwilym , who wrote of courtly love, animals and nature, and some more bawdy goings on, including in praise of the penis. This film has conjured up in some critics’ minds comparisons with another (lesser) poet Dylan Thomas’ Under Milk Wood, but Thomas’ view of Welsh life is more comical and satirical, set on the coast further South.

The film’s title comes from a Noam Chomsky phrase “colorless green ideas sleep furiously”- that is one of its contrasts, as is its green-ness compared with greys too. With the beautiful and artful shots, it’s more than a straightforward fly on-the-wall documentary- while unobtrusive and without voice-over, the director’s character comes through. It’s not so much a Wiseman film as a the film of a wise man, i’d say. Koppel has been employed teaching on films at Aberystwyth university, several miles from the film’s setting. I like the way the static camera allows movement onto and off screen, generally resisting temptation to follow, and so increasing the sense of off-screen space

Sleep Furiously encourages contemplation. It quietly takes its time, mixes numerous (relatively) long takes with some shorter scenes and “timelapse”, long shots with close details, mainly static camera with occasional movement, low shots e.g of hooves, with higher rural views. It could be considered a tapestry, interested in patterns, textures and effects of light, and also in the seasons and elements. The wind rustles the grass, blows clean white sheets on a line. The wind makes mischief with a new signpost, turning it in wrong directions- we may not need the accompanying ditty from a local to see how modern ways aren’t always the most practical. The camera dwells on rocks, stones, tools, the light falling on a moth’s wings, a pig’s curly tail, while the sheep make memorable patterns in a landscape that would bring a knowing smile to Kiarostami.

Considered lyrical and poetic, it’s unpretentious as the lives it portrays and the sponge cake we see being prepared. At its heart is the mobile library, a means for chat and for the outer world to penetrate the local consciousness. We see machines alongside older ways, mention of computers with sheep dog trials (well, a practice run), jams and vegetables, children dancing and making music. Although the school and future of the community may be under threat, alongside yawning, tea-making, rambling elders, we are reminded of youthful potential- fireworks a short exuberant contrast to the slowness of the pace and land.

There are pleasures to be gained from small contrasts: birth, death, vegetarian cookbook, mention of a pig’s future fate…. Seek them and ye shall find. Trefeurig is part of Welsh-speaking Wales (the strongholds of the ancient language are mainly in the West), but there are English voices too. The general impression remains one of communal harmony. Roger Ebert found the film lovely but too complacent. Its soul is good and i think he’s wrong on the second count. It was a worthy Sight & Sound film of the month.

It’s a film for animal lovers (sheep, ferret, dogs, cat, cows, fish…count them!), taxidermists, tree lovers (one fine noble tree stays in the mind) , tool-makers, agricultural students, anthropologists, cloud-watchers, tao-ist meditators, cultural historians, admirers of scenery and cinematography, as well as linguists. Approach it as you want, but watch in the right frame of mind, immersed in its gentle rhythms, and it should be very rewarding.