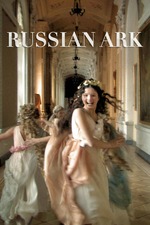 Russian Ark is not only a film of incomparable technical ambition; a sinuous, languorous, labyrinthine ramble, achieved in a single, astounding 96 minute digital take, that glides stealthily through the gilded splendours of the Hermitage at St Petersburg, guided by an 18th century French diplomat, with audience and a mumbling off-screen “spy” joined as spectators to a sumptuous array of paintings and sculptures (Rembrandt, Van Dyck, Canova..), classical concerts, a grand ball, historical pageants and figures, including a now young, now aged Empress Catherine II; it is also a pretentious, self-indulgent elaboration of the director Sokurov’s thematic concerns, a preposterous virtuoso display of costumes and choreography (marshalling a cast of almost a thousand); an extraordinary, painstakingly rehearsed theatrical performance, replete with lugubrious longueurs, that renders editing redundant; a refined examination of the links between past and present, various art forms, Russian and European civilisation, illusion and reality; a culmination of certain arthouse aspirations that also serves as a beautiful eulogy of cinema history, recalling Last Year at Marienbad, Celine and Julie go Boating, The Leopard, Bondarchuk’s War and Peace, Anger’s Inauguration of the Pleasure Dome, Ophuls, Von Sternberg, Kubrick et al; a noble, elegiac testament to celluloid and the prodigious ten minute take; an allusive celebration tinged with melancholy; a closure, an opening; a deliciously sensuous surreal journey from within a disturbed mind; a Carrollian wander through a cultural warren; an ego trip for director and viewer alike, with camera as eye for an I; an eyes wide shut meditation on vision, voyeurism, identity; an intimate space odyssey of 2002, an ethereal exploration of Time, a graceful, ghostly reflection on transience and the echoing footfalls of history, a remembrance of things past, a Proustian sentence; a floating repository; a dream, death, eternity…and none of the above.