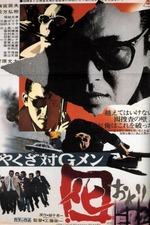 DANGEROUS TRADE IN KOBE stars Matsukata Hiroki, who’s a huge favourite of mine, and Umemiya Tatsuo. Sugawara Bunta plays a rather minor role.

Ise Sadao (Matsukata) is a yakuza, Akutsu Ryusuke (Umemiya) a “G-man”. They’re stuck with each other as a result of a deal between Ise and the drug enforcement agency. Akutsu, one of the agents, is to infiltrate Ise’s gang. Ise slowly warms up to Akutsu and even goes on to call him “brother”. Akutsu is a bit more restrained, not openly answering Ise’s brotherly love. If Umemiya comes across as more stiff and reserved, then that is to be attributed to Umemiya’s character’s job as “G-man”, rather than a lacklustre performance.

DANGEROUS TRADE IN KOBE is not as violent as can be expected from a jitsuroku through and through, but then this film is not a jitsuroku through and through: it’s low on action and violence, high on dialogue, and it’s character-focused. Matsukata — that goes without saying — doesn’t disappoint. A decent watch, but nothing too memorable. Oh, and Bunta donned a fine beige coat with a scarf in a faint yellow and stylish sunglasses to boot. If only he had more to work with in this film!