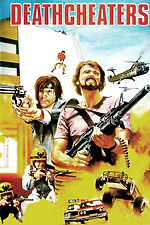 "When are they gonna get to the fireworks factory?"
*sobbing*

This is like a bunch of teenagers trying to make a Mission Impossible sequel by filming themselves drifting someone's dad's Camaro in the empty field behind the high school, and then renting a jet ski during spring break for the "big finale".

Takes itself way too seriously to have that kind of title. About 15% death cheating and 85% bland secret agent story. Most of the stunts are pretty unexciting despite being the point of the entire movie. Definitely not interesting enough to bother sitting through the endless dialogue scenes inconveniently placed between them.

Not a single comedy bit lands on its feet, and boy are there a lot of them. Before even an hour in it's straight up boring. Like a lame 80s kids movie. File under Do Not Bother.