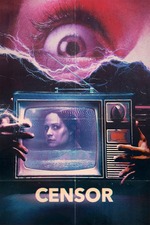 There's no second act, the ending made me laugh, and there's a purple key light that's in nearly every single shot. The parts that are supposed to look shitty are shot too well, and the stuff that's supposed to look good is shot amateurishly. The fake horror films they make are inauthentic (you couldn't even shoot these on actual film?) and have an overwhelming sense of "is this really the best you could come up with". The movie posters are hilariously bad looking. I have no idea what the fuck is going on with the aspect ratio, as there doesn't seem to be any logic to when it changes, which is constantly.

big "first draft" vibes. feels like a waste of a good idea.