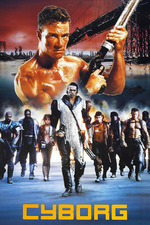 I have a total soft-spot for this one. I grew up loving it, and not having seen it in a good decade or more, I was worried that my nostalgia would be ruined, but it really wasn't. This is one of those films that feels like watching a live-action sci-fi anime from the late 80s/early 90s. Everything from the costumes, storyline, bizarre characters (mostly named after guitar brands), and even the score, throws off a heavy anime-inspired vibe. Van Damme is solid in his role, and the big bad guy is over-the-top awesome. Sure, the film is going to make you laugh just as much as you take it seriously, but it's sure as hell a lot of fun. My only real gripe is how poorly it was edited to take it down to an R rating. The gore cuts are done so ungracefully that it's really jarring. Sadly, I don't think anyone besides a handful of people give enough of a shit to want to see Albert Pyun be allowed to do a real director's cut instead of the workprint DC. Still, the final cut should prove to be entertaining for fans of 80s sci-fi/action.