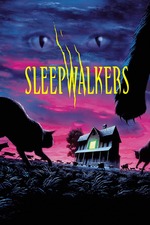 “Stop looking at me you fucking cat!”

From the mind of a coked-out Stephen King comes the emotional tale of incestual shape-shifting cat demons simply trying to get a bite to eat.

Fun fact: I used to hate this movie. The embarrassing CG morphing sequences, the wild overacting, the constant extreme close-ups, I thought it was a joke.

Well now I’m in on the joke and loving every second of it. Mick Garris (Critters 2) infuses this movie with destructive energy, seemingly throwing ever batshit idea he and King had into the film.

Ideas like having the beautiful Mädchen Amick (Twin Peaks) be introduced by having her dance in a movie theater lobby to Do You Love Me? by The Contours.

Or giving the sleepwalkers the ability to not only conceal themselves and their car from human eyes, but also have them be able to morph the car into another make and model!

Or killing a cop with a corncob

Or having Mark Hamill make a cameo before the title card, then never even get mentioned again.

This movie is pure excess and loves every minute of it. Gleefully cheesy to the extreme with some fun gore and monster suits, some hilarious acting, a weird as hell plot, and a police cat trying to avenge his cop buddy. Sounds like a good time to me.