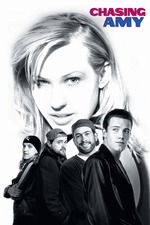 A crude but honest romance that pulls back the covers on sexual taboos, to tell a uniquely human story of love, insecurity, friendship, and loss.

"I felt small, like... like I'd lacked experience like I'd never be on her level, like I'd never be enough for her or something like that ... But, what I did not get, she didn't care. She wasn't looking for that guy anymore. She was... she was looking for me, for the Bob …. So, I've spent every day since then chasing Amy... so to speak."

Wow, I had forgotten how much I enjoyed classic Kevin Smith movies with all his hilarious realistic dialogue, that at times does devolve into vulgar ranting. I remember my Dad saying that he rented this for my Mom from Blockbuster one New Year's eve, and he told me how much she hated it. At the time I just knew about its stigma of being a romance about a guy who falls in love with a lesbian. I did eventual watch it after I discovered Kevin Smith, but I think I was too young at the time to really appreciate it. This time I came in expecting a light comedic watch, but I ended up being totally blown away by the emotionally draining performance from Joey Lauren Adams who plays Alyssa.

"They fuckin' used you! ... No! I used them! You don't think I would've let it happen if I hadn't've wanted to? Do you? I was an experimental girl for Christ sake!"

For me, the performances were just one step away from feeling too stagy, but instead hit me just the right way. The story follows a comic book artist named Holden played by Ben Affleck. Holden and his loudmouth best friend Banky played by Jason Lee, are the creators of the 'Bluntman and Chronic' comic book which ties this movie into the same universe as Kevin Smith's other movies which feature him and Jason Mewes as Jay and Silent Bob. One day Holden hits it off with fellow comic artist Alyssa who is from his home town in New Jersey. She wants to see him again so she invites him and Banky to a club to hang out. But then and after Alyssa delivers a passionate vocal performance, they are both stunned to realize that she is actually into girls and they are in a gay bar.

"Since you like chicks, right, do you just look at yourself naked in the mirror all the time?"

The movie is the opposite of being politically correct as it discusses various taboo subjects relating to homosexuality and race. Yes, some of it is cringy, but there are also some legitimate and interesting discussions that go on between the very naive Holden and Banky and the experienced Alyssa. We see early on how traditional and close-minded Holden is when discussing lesbian sex with her, by saying that she must be a virgin because penetration does not take place between two girls. You can already tell she is on another level than him, since she refers to the fact that someone can be penetrated not only physically, but also emotionally by the person they are being intimate with.

I got a kick out of the scene were Alyssa and Banky go back and forth sharing battle stories about some of their rougher romantic encounters, with Holden looking dumbfounded that the girl he is into is engaging in guy talk with his best friend. Holden and Alyssa continue to hang out and become really close, much to the dismay of Banky who feels threatened by their connection.

"Which one is going to get to the hundred dollar bill first? The male-friendly lesbian, the man-hating ****, Santa Claus, or the Easter bunny ... The man-hating **** ... Why? ... I don't know ... Because the other three are figments of your fucking imagination!"

"You are the-the epitome of everything I have ever looked for in another human being. And I know that you think of me as just a friend, and crossing that line is-is-is the furthest thing from an option you would ever consider. But I had to say it. I just, I can't take this anymore."

In the slightly cliche setting of a downpour, Holden pours out his heart to her and she falls for him too. To combat this Banky happens to come across some dirt on Alyssa's promiscuous past, which blows Holden away because he was hooked on this notion that he was her first male lover. I love the build-up to their moment of conflict during the hockey game. Then when she finally bursts out so suddenly and admits to having this 3-way, it almost feels like a fantasy sequence, which is likely the feeling Holden has from this shock. But then we see this sexually explicit outburst next to a crowd of other hockey fans was for real.

In a very passionate moment, we come to learn that Alyssa has not lived her life by conforming to social norms, and has explored her sexuality. And after all that, she has come to fall in love with Holden. I really appreciated how her character shows that love should not be locked down into these conventions of gay and straight, and it is really all about human connections. But Holden being who he is, gets hung up by all of this and lets his insecurities about Alyssa's past get in the way. And then he naively comes to believe that he must match her sexual exploits by proposing to have a 3-way with her and his best friend. This shows that he totally does not get why she went against the life she created for herself as a lesbian in order for her to be with him. Is it a bit on the nose when Silent Bob explains this all to us ... sure, but personally it just reinforced everything I was already feeling about the story to that point.

"I love you, I always will. Know that. But I'm not your fucking whore."

Personally, I can’t relate to being insecure about my significant other’s past on an adult level. While I would like to think that it would not bother me, thinking back on my High School years I recall already wondering about those things when I met new girls. But at this point in my life I totally related with the passion Alyssa presented with wanting to be with this one person she felt connected to, and being so frustrated with Holden for screwing it up.

On the technical side, you can tell Chasing Amy was a low budget film by how grainy it is. But I felt that matched the movie thematically with being a gritty look at life and relationships. Visually the movie is pretty basic and it does have some cheesy moments, but it is really the characters and the engaging/funny dialogue that make Kevin Smith's early work so special.

P.S. In typical Kevin Smith fashion, there are plenty of fun cameos throughout with early performances from Matt Damon and Casey Affleck.