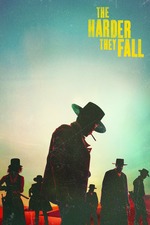 Aside from Pixar’s Luca and Wes Anderson’s French Dispatch, have I told you guys that this is my most anticipated film of this year? And the reason why is that it's a western film with some of my favorite actors and some of you guys know I'm a sucker for adventurous western movies.

The Harder They Fall is a magnificent film. This film has a lot of charm and a lot of original things. This film has an authentic set design, fantastic cinematography, a flowing narrative, great characters, and amazing editing.

This is how I briefly explain the plot: This film follows Nate Love, an outlaw who is thirsty for revenge. He meets/reunites some people. Meanwhile, a group of criminals infiltrates a train to save one gang member, his name is Rufus Buck, who is the villain of the film. Nate goes around the towns recruiting people while Chris Buck and his gang go through town to town and rob banks and kill a lot of people. Will they meet and have an epic fight?

My only issue with this film is the soundtrack, some songs don't feel like a banger. I wish it's something like Django Unchained where every song is a banger. But at least some songs made me feel the best.

Overall, this film is a masterpiece, it became my SECOND favorite film of 2021, and I highly recommend hopping on Netflix to check this out. If it's still in theatres, please check it out there. Also, late 2021 is probably going be the best time for cinema, two late 2021 released films have dominated my top five favorite films of 2021 already. Anyway, thank you for reading.

I should mention that this film pays a cute homage to Chadwick Boseman, I won't tell y'all where it is but try to find one 😊.