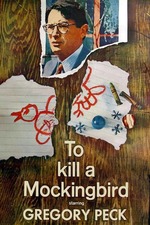 As poignant today as when I first saw it in the mid sixties.

Many films that try to directly translate the original work without adding an original voice fail. Not here. While Harper Lee's novel couldn't be completely captured, Horton Foote did a remarkable job. Probably the best book to film adaption I have ever seen.

Acting? Whew! Greqory Peck's quintessential role. Who wouldn't want Atticus Finch as their Dad? While Peck was the backbone of the film, the star was film was first time child actress Mary Badham. Her portrayal of Scout was pivotal on making this story work. Her masterful performance playing a precocious character, but not coming off as precocious herself is amazing. Phillip Alford as Jem and John Megna as Dill were also perfect. And then the rest .. James Anderson as the scary Bob Ewell, William Windom as the crafty prosecuting lawyer, Paul Fix as the wise Judge, Frank Overton as the decent everyman Sheriff, .. and of course Brock Peters as Tom Robinson. Even Robert Duvall's short scene is masterful. I've never listed this many actors in a review, but this cast deserves recognition, as they made the film.

And extra special accolades to Stephen Frankfurt who created what I think is the best opening sequence in film history.

On this re-watch, what stood out for me most is that it reminded me, and more than that, made me feel like a kid again. When I first saw it I was 9, It was an introduction to the scary outside world, and the bridge between childhood and adulthood. The re-watch brought that moment in time back to me.

My definition of a perfect film.