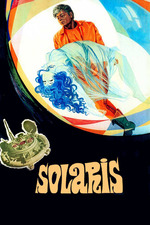 Solaris is a movie that is sad and at the same time beautiful.

Solaris is a science fiction film that does not seek the discovery of other worlds, but a search for himself by the protagonist. The journey is not to outer space, but to its psyche, to the memories that define each human being. The analogy with books scrutinizes in memory, in the images that treasure our feelings, that trip within our reach that we do not always have the courage to travel. Loving someone implies a possibility of loss, but that path of Sisyphus momentarily distances us from fear and makes us full. Man's happiness is possible without knowing the reality of Nature, perhaps that blind start is enough to know the other, to dare the risk of losing. Knowledge seeks certainties, while love entails uncertainty. That fear of dying mobilizes us far beyond scientific evidence.

The film is a story of contradictions personified in cosmonaut Kelvin. Kelvin is able to travel light years to find an answer in Solaris, but in turn he is not prepared for that answer. He thus comes to face to face with everything he has not yet overcome. His dilemma is the same on earth as in space, his problems, memories and burdens do not disappear in the cosmos. Thus, the dividing line between act and consequence, reason and heart is radically blurred to confront a story that seems to develop instinctively, without premeditation, but that in turn irremediably drags us to a logical and inexorable end, as if again and again, the same destiny prevailed at the end of all possible paths.

Solaris has seemed extraordinary to me in every way. Apart from its technical finish, excellent to be a product with a very limited budget, and the performances, where it shows very well-defined and built characters, I have loved above all, its excellent philosophy, where it shows human beings one step away from finding salvation in humanity itself (totally contrary to 2001, where it shows humans lost in the new technological era of the I.A.). Perhaps the only thing that can be criticized about Tarkovsky's vision of Stanislaw Lem's novel is that it retains some sequences that its only purpose is to create atmosphere.