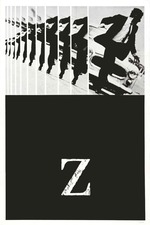 One of the most influential political thrillers post-WWII. I didn't really know anything about this film before watching it. I had seen Missing (1982), directed by Costa-Gavras, for a political film course, but it wasn't the best I'd seen. After seeing this film and its impact on international political discourse, I understand more of why he had to make Missing weaker than it could have been. While Z is a very Greek film that only recently had seen such corruption from right-wing militias and oppression on its peoples, Americans weren't quite ready to look at our own misfortunes in its plot. When he gets to the point that he can make Missing, Costa-Gavras had the clout he needed to get the right actors (Jack Lemmon and Sissy Spacek) to reach American audiences. In that film, he uses Americans as his main characters that get caught in the middle of the Chilean military coup of 1973. Maybe at this point he understood it would be hard to get America, one of the most powerful and vulnerable countries in the world, to see the dangers of right-wing fascist corruptions without white, American actors in an English-language film. Because he had to use an outsider's take of the terrors of the Chilean coup, Missing was much less effective than Z.

One reason political thrillers are so captivating is that they hold such universal themes. Each citizen of each nation could be subject to governmental oppression and loss of democracy; many are subjects to this today. It wasn't until a few years after this film when America had one of its biggest political scandals that undermined our entire democratic process: The Watergate Scandal. Media was silenced or corrupted (as shown in Z), politicians got off scot-free, and the citizens were those who suffered the repercussions instead of the politicians. As is the case for the government in Z, Nixon was pardoned of his crimes and those who threatened the security of our democracy went unpunished. We didn't learn very much from Watergate, even going on to have an even more right-wing government under the Reagan administration a few years later.

The events of Watergate inspired one of the most popular American political thrillers to date, All the President's Men (1976). One of the first films to truly expose the corruption of American politicians through a field that was being vilified and silenced: journalism. The journalists and CIA agent who revealed the corruption were heralded as heroes, only for the U.S. to end up where we are today. A country where the media is labeled as "fake" or undermined by politicians with whom they criticize. A country where hundreds of right-wing fanatics storm the U.S. Capitol in an attempted insurrection after being influenced by the sitting President who has dangerously called his election loss "stolen." Films like Z are so important in exhibiting what mistakes and traps we fall under politically, even if we fail to learn from them.

Political corruption is not a rare occurrence and will always be dangerous to the livelihoods of citizens around the world. Z perfected the genre's formula in 1969, giving inspiration to directors and storytellers around the world to expose more governmental injustices to audiences through film. Though not an American film, it is important for Americans to watch this film and understand how corrupt politicians and authoritative powers will twist words and situations to subvert citizens. The film begins with the Head of Military Police warning of liberalism as a disease; a dangerous mindset expounded by some conservative representatives today. Our officials need to be held accountable for the dangerous threats to democracy they pose, just as the officials in Z should have been.