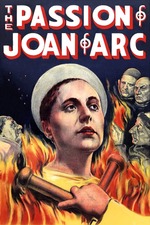 Such a hauntingly beautiful film. From the score to the lightning to the closeups of a teary-eyed Falconetti, the sense of dread, solitude, and martyrdom is not lost in the direction of Dreyer.

It may sound oxymoronic to call an 82 minute film slow, but with the tight, claustrophobic shots that generally convey progression through facial expressions and sporadic text with never-ending questions, accusations, and quick defense, it feels that the story isn’t progressing. I take the slow progression to be the goal of Dreyer in portraying Joan’s trial as pointless accusations that never seems to end or go anywhere- what questions are they asking and why when she will always answer in God’s defense? There is no lawyer, no court, no true jury, no support in the stands- it is just Joan. The tight shots of her facial reactions reveal that to Joan it is her and God against the English occupation of France. Her allegiance is to God and to France, but when her life is at risk in their defense, it is just her alone in a courtroom as she is chastised and threatened. Dreyer’s use of space and angles are so purposeful in creating these sentiments.

Joan is a Martyr- if not for religion, for her country; if not for country, for her faith which encompasses both. The most poignant imagery of her comparison to Jesus as a Martyr is when the crown is reluctantly placed on her head. Though she didn’t have a thousand French people following her as she leads them into battle to fight for their country, her death was just as impactful in this movement for her people.

I’ve never been religious. I’ve maybe gone to church twice in the past few years for a funeral or so my grandmother won’t have to attend Christmas Eve Mass alone, but otherwise religion has had no real presence in my life. The religious aspects of this film don’t really speak to me, but at the end of the day this film is about so much more than religion- Joan’s dedication to God just happens to be the medium through which we explore the themes of martyrdom, oppression, obstinance, and faith.

This film is such a landmark in filmmaking and should be a requirement for all those who wish to understand the deep history of the crafting of film as an art. It may not be one that I’ll rewatch, but it is essential viewing.