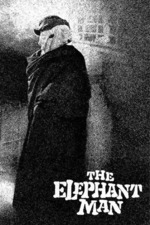 Coming off of his cult-classic debut Eraserhead (1977), David Lynch received critical acclaim for his portrait of human decency and social exploitation in The Elephant Man. Based on the real-life case of John Merrick who was born with severe deformities and paraded as a "freak" by a late 1800s English ringmaster, The Elephant Man is a critique of how we as humans treat differences and abnormalities that make us uncomfortable.

As with Eraserhead, sound is an important part in creating an uncomfortable and physically unsettling experience. Even if we cannot see John Merrick under his hood, we hear his sharp, labored breathing or slurping as he struggles to speak. Lynch puts us into an uncomfortable mindset that many may have felt when actually interacting with Merrick.

When we come into contact with someone or something that makes us uncomfortable, our general instinct is to avoid it or attempt to leave it unacknowledged. When someone walks into a busy room with a visible deformity or disability, many will attempt to avoid them so as to not draw attention to their difference. Do we do this for our own comfort or to try our best to make them feel 'normal' and not stared at? Maybe it's both, maybe it's neither, but nonetheless we generally don't understand how to interact with someone with a notable 'difference' from the norm. When the nurse says that John "doesn't belong here," is she saying that because she feels he doesn't deserve to be here with a life that will face such scrutiny from human cruelty, or because she feels uncomfortable with how he doesn't conform to a physicality that is seen as 'normal'?

Because of his obvious physical differences that people don't understand, John is an easy target for those who seek novelty and difference as a sort of pleasure that makes them feel superior in some way. As he is put in a freak show, John is heckled and beaten and cast as immoral- human beings in their insecurity may find it easier to treat those different as animals so as to justify their cruelty. The ringmaster calls John an imbecile that cannot speak or behave in acceptable 'civilized' manners. Dr. Treves discovers through his kindness in helping John that not only can he speak, but he is intelligent and sophisticated.

Why do we find it so easy to laugh at and ridicule someone different when we don't think they can understand us or can be mislabeled as inhuman? Why can't our first instinct to difference be kindness- something John embraces after all of the brutality he has suffered? Lynch paints a beautifully tragic picture of the reality of human nature and social scrutinies; especially those we don't care to admit. What's more upsetting than seeing John's deformities is society's lack of compassion for what we don't understand.