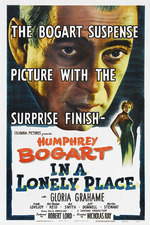 How had I never heard of this film until recently?? Bogart is absolutely amazing in this film- his calm demeanor meeting a violent and confusingly terrifying energy is something I’ve never seen from him. We know him as a man who keeps his cool- he’s suave, doesn’t get overexcited, can be monotonous at times, and we rarely see too much emotion (especially of excitement) in his biggest roles. That’s what’s most terrifying about this character. When he makes Brub and his wife reenact how he thinks the murder would have gone, we see a haunting smile grow upon his cheeks. A man who shows such little outward emotion on his face being so gleeful at a woman being strangled by a man is terrifying.

He’s a writer who gloats about having committed many murders in his films, but his suave mannerisms lead Laurel to believe that’s where this energy ends- on paper. The most raw line of this film is spoken by Bogart when he, in referencing his screenplay, said “I was born when I met you. I lived while I loved you. I died when you left me.” In any other romantic film such as Bogart’s Casablanca, we would take these words as true love between two people that are meant to be. In this film, the line is haunting. With Dix’s violent tendencies and Laurel’s growing fear of him, the words reflect more of an obsessive, constraining relationship than a romantic gesture.

We see in these moments as well as acquaintances sharing his violent past that he is a dangerous man. There is hardly a reason for us not to suspect him of the murder. He loves Laurel, which makes their relationship even more terrifying. His rage is evident and can be triggered so easily. Could his jealousy and need for control be fixated on her, leading her to a doomed fate?

(Spoiler) Even if Dix didn’t commit Atkinson’s murder, we aren’t any less fearful that he could do something similar to Laurel.