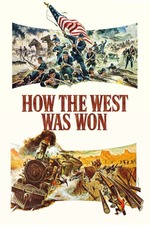 Once it said the west had to be won from “nature and primitive man” I knew I’d have a tough time enjoying this.

Worst moments: Anytime John Wayne was on screen; Jimmy Stewart marrying Carroll Baker who is like 30 years younger than him; the racist remarks to Native Americans

Aside from the big faults I just mentioned, it’s an okay film. It documents Manifest Destiny through the lives of a family moving west. The cinematography is incredible, and Debby Reynolds’ character is surprisingly progressive in terms of feminist ideals not often portrayed in westerns. Other than that it doesn’t really offer much besides the allure to Americans of an Old West epic.