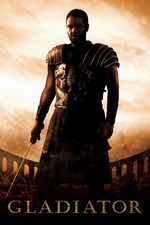 To answer the question: yes, I was very entertained. Interesting to look at this movie as an influence to Game of Thrones battle scenes, cinematography, character relations, and thirsts or distantes for power.
What this movie lacks that Game of Thrones gets right is the proper character development. Commodus almost seems like a mix of Joffrey with his cruelty and readiness to kill anyone who protests him and Ramsay with his wrath partly deriving from his wish for love and acceptance from his father and people. The deeper character exploration, well-written scripts and direction that make Joffrey and Ramsay such great characters are what is missing from the conception of Commodus.
If you want great battle scenes, gore, and action, Gladiator and Game of Thrones are on the same plane. On the other hand, Game of Thrones improved upon Gladiator’s success through deeper investment in plot and emotional connection to characters in the battle of power and greed.
While overall an exciting watch that makes its box office and cultural success understandable, its Best Picture win over more developed films such as Crouching Tiger, Hidden Dragon can be disputed. If action, excitement, and a wow-factor of what’s portrayed on screen are what makes a best picture, Infinity War could have easily beaten Green Book in 2019 (though in all honesty I may have preferred Infinity War over Green Book).