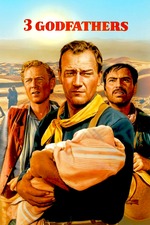 I'm a tough audience when it comes to classic Westerns, but a sucker for a Christmas movie, so this really could've gone either way. Unfortunately, it was too much of a Western and the type of Bible retelling Christmas movie that doesn't really appeal to me.

One reason it was really tough for me to enjoy this film was that its main attraction was John Wayne. I have a strong disdain for John Wayne as a man outside of acting as well as for the macho-misogynistic-arrogant characters he continually plays. In this film, he yet again is the man who is 'better' than all the others. He's the most 'manly', the leader of the three, condescending, judgmental, and the strongest-willed (he outlived the two other men on their journey). This kind of character is what men think they should be like to get women and be the alpha, respected male in the room- but really they're just an asshole. There's even one scene where Bob (Wayne) implores Pedro (Pedro Armendariz) to stop speaking Spanish around the baby because he "should be brought up speaking real American"- so, yeah, he's racist too.

My criticisms aren't all necessarily specific to this film, but to this film as an example of the Westerns of this time. It's a fairly average Western for this time- not socially conscious or really commenting on anything like the great Westerns such as "Butch Cassidy and the Sundance Kid," just there to be absorbed and put you out of your environment for two hours. At the end of the day, the performances are pretty mediocre and it's slow. The only redeemable part of this film, for me, was the character of Pedro, who was attentive and sweet to the baby yet not so naive as the younger member of their group.

I was only attracted to this film because it was featured in Turner Classic Movies' "Christmas in the Movies" book in order to find more Christmas films to add to my yearly watchlist. Unfortunately, this film will not make the rounds like others on the list have. It's the perfect Christmas movie for old white Christians who love Westerns and are more traditional in their Christmas celebrations truly being about the stories of Christ. Otherwise, it really only belongs on the Westerns Channel cable reruns.

If you came because you wanted to watch three naive, single men try to raise and protect a baby, please just watch "Three Men and a Baby" instead. At least in that film there's no creepy scene where John Wayne rubs an obscene amount of grease all over the baby's back.