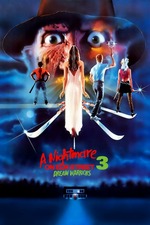 Dream Warriors returns to the surrealism of the first movie, but with a bigger budget, upping the ante with larger sets and improved special effects. Some are quite impressive (the worm, Freddy’s lair) and others not so much (the Harryhausen/Army of Darkness-style skeleton).

Story- and character-wise this one didn’t grab me as much. The group of kids who become the “dream warriors” felt underdeveloped, defined mostly by superficial characteristics — black kid, kid in the wheelchair, mute kid, etc. The whole “give him a proper burial” thing is pretty cliché, and I also didn’t care for the randomly appearing nun who helps them out now and then. Also, now that I think about it, the plot device driving the whole third act — Freddy holding a victim hostage — doesn’t make sense since in all other cases Freddy dispatches his victims straight away, and I didn’t see any reason for him to act differently here.

Freddy starts to come into his more well-known character, dropping quippy one-liners and such (“Welcome to prime time, bitch!”). I have mixed feelings about it — I don’t mind the campiness, and it was nice to get a better sense of Freddy as a character rather than merely a presence, but I also feel like it loses some of the menace of the first two films.

Heather Langenkamp’s acting hasn’t improved much, and somehow it’s less endearing this time around. There is altogether too much screaming from Patricia Arquette.

Quibbles aside, this is still a solid horror franchise sequel, a good example of how to take an initial concept and riff on it in creative ways, and lean into camp without losing the horror edge. It was fun to see the more familiar version of Freddy. And you gotta love that Dokken tune!