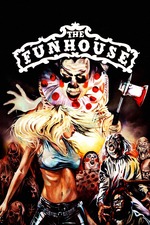 I've been a big fan of this since I was a kid. It's got alot of play on late-night cable and really struck a chord with me. Traveling Carnivals, there's always been a bit of a strange vibe to them. The Funhouse always was my favorite attraction ahead of even the crazy vomit inducing rides and turkeylegs, funnelcake,& cotton candy. Sure it's just a really slow bumper car and spooky sounds, lights and animatronics; but it's still fun. After opening up with an homage to the opening scene in Halloween and the infamous shower scene in Psycho Hooper takes us on a double date to the carnival as we get to know our 4 protagonists as the plot moves along at the pace of Final Exam. The underlying messages (IMO) is that both A) Your Friends Can Get You In Trouble & B) children when you are on your own it can be a dark & scary world without your parents to help you. The older daughter has the freedom to go out but has to lie to her dad that the 4 of them would go to the movies instead of the carnival. The dad warns that it's the same one that traveled through another town when some young girls bodies showed up. She has an awkward feeling that she just can't shake and even though she's out on her first date and has her best friend at her side she's distant and jumpy at times, kinda killing the date(its really eerie when the fortune teller asks if she has premonitions). Then there's the boy, he's jealous his sister is going to the carnival so much that he sneaks outta the house and heads there on foot. Along the way a crazy old man asks the kid if he needed a ride and points a rifle at him and proceeds to laugh maniacally; AND THIS KID PRESSES ONWARD TO THE CARNIVAL when it'd be easier to turn around. The girl and her friend are talked into staying the night in the Funhouse with the two guys and call their parents and pretend to be staying at each others house. The little brother sees the 2 couples go in and never come back out but eventually gets found by creepy man who calls their parents. The most terrifying shot of the film is her trying to get her parents attention but they can't hear her screams. She's abandoned by them as they take the boy home, but why would they think she's at a carnival funhouse she went to the movies and then stayed at her friends house right?? In a way this string of events was set into motion when she lied to her pops and was talked into going to the carnival by peer pressure.

Not everyone is a fan of slow pacing but I love it's got an eerie vibe the entire way through until the third act ramps up the horror.

Firstly the boy pretends to stab his older sister in the shower. (I'm a fan of scaring folks myself but even I'm like "wtf aren't some places sacred?!!" )

I love the crazy kinda of attractions at the Carnival ("they wiggle and they dance" , "alive, alive,alive", ect)

When the horror story finally kicks into gear it's going strong. Laszlo's cinematography is superb as is Bell's score. Larry Block's script definitely had the perfect setting for a horror flick and some great key elements to make this so memorable. Tobe does a great job directing some tense scenes. I like that this came out in '81, what a year!!

That ending...our virginal final girl emerging from the Funhouse it's daylight she was the only to survive the night, she's endured so much yet is holding it together until the fat lady starts laughing and she breaks down crying. ..I love it as much as Sean Penn's teary last scene in Bad Boys. You still may be crying a child's tears but after your survival you are an adult now

Johnny B. liked these reviews

Johnny B. is using Letterboxd to share film reviews and lists with friends. Join here.