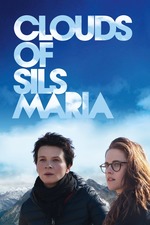 Maria Enders (the divine Juliette Binoche) is acting in a production of a play that she first performed 25+ years ago, indeed, the play that made her a star. This time however, instead of playing the confident, young flirt Sigrid, Maria is playing the needy, old, suicidal Helena. Valentine (a casually excellent Kristen Stewart) is Maria’s devoted assistant. And Jo-Ann Ellis (an underused but capable Chloe Grace Moretz) is the young superstar playing Maria’s once famous role of Sigrid. Maria is thrown into a bit of a crisis, as she confronts a role she once thought pitiable, the younger generation, and the fact that the times they are a-changin.

There are 3 layers of meta-fiction here:
1. The real world: Juliette Binoche, Kristen Stewart, and Chloe Grace Moretz
2. The film itself: Maria Enders, Valentine, and Jo-Ann
3. The play within the film: Helena and Sigrid

I found myself quite amused when a conversation I thought was taking place in level 2, was really the characters rehearsing the play in level 3. Olivier Assayas deliberately, cleverly wallows in such disorientation. Maria’s reliance on Valentine mirrors that of Helena and Sigrid. Valentine makes arguments in favor for actors hitting emotional depth in superficially dumb films, which one can imagine might apply to Kristen Stewart in some of her less critically admired films.

I found these levels and themes interesting all the way through--but the ending left me a bit cold. I think the ending is too abrupt and anticlimactic for my tastes. Additionally, it seems to tie too neat of a bow around Maria’s struggles throughout the film. Maria seems to just come to terms with it all, and boom, done. Though that may be a failure of interpretation on my part. Still, the ride to get there was interesting enough for me to enjoy the film overall.