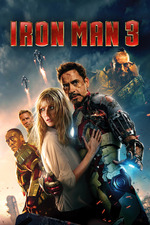 As it usually happens, fans hated everything that made this great and loved the drivel. When Shane Black is in the driver seat this is delightful, Downey is a master at his dialogue and there’s plenty of weird subtext about Id and identity in this. But you can see where Black is in over his head and promptly tosses the keys back to the studio. Severe whiplash between corporate action and Blackian attitude.

The script has clearly been meddled with, flows oddly and characters are given prominence only to get killed off early. Apparently Rebecca Hall’s character was supposed to be the main villain, but the Marvel brass through a female villain wouldn’t sell toys, so they handed off to Guy Pearce. That explains why the fuck she was even here in the first place, and why these movies will never be cinema.