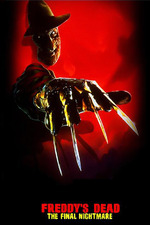 Every town has an Elm Street!

This one is outrageously stupid and campy, and it's hard not to be at least a little bit charmed by it. You're going to want some wine with this cheese.

This is effectively the Saw 3D of the Nightmare franchise: the ostensible end of a horror franchise (that nevertheless refused to die), which is very tonally different from its predecessors, and also both decided that "the last movie of a horror franchise" was the right time to experiment with 3D. While both are incredibly entertaining in how stupid they are, the key difference is that this one actually knows it.

And it's no hyperbole to say: Freddy Krueger has never been more of a cartoon character than he is here. Some scenes almost feel like a bloody Loony Tunes. (At one point while comically ambling behind a deaf character, shouting and making faces, he literally breaks the 4th wall and makes the Sshh gesture to the audience)

This one and Dream Child both have what critics would refer to as "not very good plots", and if this movie took itself as seriously as the previous outing, the silly twist of "Freddy had a daughter who forgot she was Freddy's daughter" would be more deserving of criticism. But it doesn't, so it's not.

It also expands slightly on Freddy's backstory - mostly by further reiterating that he has in fact always been a naughty boy. And also showing the moment where he was killed, and how, just before death, was granted the power to become eternal (it's almost as silly as the Jason Goes To Hell reveal a couple years later).

But, we don't come here for the plot, we come here for the kills. And while this isn't an especially bloody or disgusting outing, Freddy is having more fun than ever here, tormenting his victims, and the feeling is contagious.

If you're wanting something genuinely scary or with meaningful thematic depth, like the original or Dream Warriors, you certainly won't find it here. But if you want a delightfully unserious, screwball slasher with campy sensibilities... you've come to right place.

➡️ A Nightmare on Elm Street