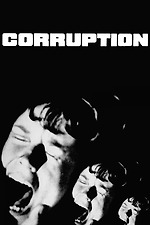 Robert Hartford-Davis’s “Corruption” gets a lot of hate. Women can be forgiven for seeing the featured poster and believing the movie isn’t for them, because it says so. Some men take offense at protagonist, played by Peter Cushing, because of the lengths he goes to fulfill his adulterous lover’s vanity.

To some extent, these naysayers have it right. Insofar as “Corruption” has anything to say about women, it’s not trying to flatter the egos of gendered identities and virtues. Cushing’s doctor is despicable for his meekness. But the filmmaker’s don’t try to make us love these people. All the principal characters are irredeemable. “Corruption” is more like a Buñuelian horror comedy about violent elitism, with the setting aesthetics replaced by a swinging London inspired by “Blow Up,” a story lifted from “Eyes Without a Face,” so as to exploit Peter Cushing’s popular Frankenstein icon from Hammer films, and violence like H.G. Lewis’s “Blood Feast” but filmed with more class and a higher budget. It's a great B mashup of elements that represent the 1960s genre filmmaking. It's also funny, entertaining, and surprisingly gruesome.

Ignore the negative hype, accept that heinous poster as a mistake from a different time, and see the movie for what it really is: A satirical and absurdist genre film. I liked it more than I expected to. In particular, I enjoyed actress Sue Lloyd, whom played Cushing's spouse. She's manipulative, humorous, and more unhinged as the story goes. Her lies and deceits become desperate and obvious, until she reaches peak insanity. Very funny and over-the-top. The music is also like a big band jazz version of a horror score; common motifs for jumps and tension are recreated in a very different timbre.

If you're thinking of watching this, just do it.