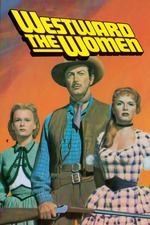 This movie owns. A hundred-so women caravanning to California ‘to marry’ but they gotta do all the work themselves because Robert Taylor shoots the other men for being lecherous creeps. Now this is a western baby—they don’t sugarcoat shit! Even the moments of lite sexism and racism feel almost like small concessions just to keep the 1950s audience on board while they subvert the shit out of your expectations. Women and children die in horrific ways, men get shot for being creeps, women shoot men to keep them in line, there’s horrendous trail driving accidents to keep even your Apple II Oregon Trail ass on the edge of its seat. No schmaltz, no music, no speeches about the importance of righteous femininity. Everything these women do is on their own terms, even the getting married at the end.

Yeeehaw! The Cinephobe streaming channel has been killing it even though I keep missing the best shit. I actually missed the first ten minutes of this because I’ve lost all sense of time during this quarantine. But Don’t sleep on it, seriously the most interesting streaming option available right now.