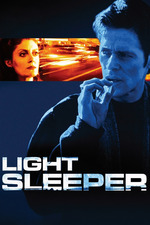 Sparkling roads lit by flickering city lights while massive trash bags fill the pavements of New York. This is a dirty place, full of dirty people trying to make a dirty buck. Even Susan Sarandon’s eccentric Ann, who’s obsessed with beauty products, can’t seem to rid herself completely of the foul nature of her business. John LeTour is a 40-year-old drug dealer, suffering from insomnia, a little bit of heartache, and a whole lot of existential ennui.

But beneath the drug-filled, criminal veneer exists a man so desperate for something else, although he doesn’t know what. LeTour has his roots in Schrader’s Travis Bickle, but here an all-consuming weariness seems to take a hold on him more so than Vietnam or contemporary 70s society. Dafoe is also charming on a completely different level than De Niro – and purposefully so. LeTour is a man who could, potentially, live a normal life, filled with tedious troubles, but having toured the streets as much as him, he fears that he has been confined to those filthy, trash-filled paths.