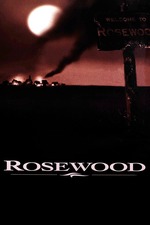 The shallow reading of this movie is that it is a simple race drama, of black victims and white villains, dated at its release and even less relevant to the America of today which, for all of its faults, no longer allows pogroms against its racial minorities.

I obviously think that’s the wrong way to look at it.

When I watch Rosewood, I see a film preoccupied with one big idea: the social reinforcement and reproduction of racism through communal violence. So much of the movie is preoccupied with the ways in which collective racial violence reinforces race hierarchy, both by showing the victims that they exist outside of the protection of the law, and by giving the perpetrators an opportunity to play out fantasies of dominance. Whatever resentments fuel violence, whatever pretext sparks it, it serves an essential purpose in propping up the system, such that those who do not want to participate, like Jon Voight’s character, become suspect.

And in the subplot of Bruce McGill and his son, we see how the violence is a tool for transmitting the values of hierarchy, from one generation to the next.

Looking at the landscape of the contemporary United States — governed, four years, by a explicitly racist president who built a political movement defined by its libidinal interest in state violence against despised others — I think Rosewood is very much a movie with something to say, and something worth listening to.