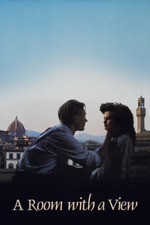 The December Challenge, Chapter II: This Time It's Personal: Film #1

Well, that was actually a lot better than I was expecting…

Based on the type of upper-class, post-Victorian, self-indulgent literature that I detest, James Ivory’s adaptation of A Room with a View is a solid and entertaining (if not guiltily so) film that makes the most of its costume drama influences and its English country setting. It focuses on the tale of Lucy Honeychurch (Bonham-Carter; Sweeney Todd, The King’s Speech), a young lady who falls in lust with a tourist – George Emerson (Sands; Leaving Las Vegas, The Killing Fields) – while holidaying in Italy. On her return home, Lucy agrees to marry a man named Cecil Vyse (Day-Lewis; Lincoln, There Will Be Blood), only to have her plans scuppered when George moves into the area.

In many ways, A Room with a View is a very typical story. It follows the same, basic pattern as much of the literature of the time and, as such, it’s hard to take seriously, especially when the author’s concerns are so frivolous. Nevertheless, the film is – at least for a costume drama – surprisingly good. It combines a good-hearted drama with a nice dollop of (perhaps unintentional) satire and comedy to tell a story that is rich in warmth and joy. It isn’t a particularly challenging film, nor does it do anything remotely unexpected or surprising, but thanks to some great direction and cinematography it manages to be a rather immersive experience.

The film’s strength rests in its cast list. Before she abandoned acting in favour of being quirky and annoying, Bonham-Carter was a damn fine performer and she puts her skills to great use here. Her portrayal of a broken but determined woman is quite engaging, even though the character is somewhat generic, and she has a great relationship with the rest of the cast. Maggie Smith (The Prime of Miss Jean Brodie, Downton Abbey) is great as the incompetent Aunt, Day-Lewis is hilarious but brilliant as Cecil while Rupert Graves (perhaps best known now for his portrayal of Lestrade in Sherlock) is fantastic as the dashing and somewhat childish Freddy. The film is done a real disservice by the fact that Julian Sands delivers a rotten performance and has all the charisma of a batch of seaweed but, if we ignore that, it’s actually quite good.

If you accept A Room with a View for what it is – insular, pretentious and self-obsessed – then you might like it. I fully expected to despise it (I could never finish the book because I found it so utterly nauseating) so this was quite a pleasant surprise really!