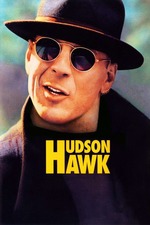 Let’s be clear: 'Hudson Hawk' is, by most reasonable standards, a pretty bad movie. Its plotting is nonsense, its secondary characters are dopey, its slapstick superspy elements are filled with unfortunate echoes of Bill Cosby’s similarly self-originated 1987 bomb 'Leonard Part 6,' there are way too many moments of flabby-cheeked electrocution and other hallmarks of people “trying to be funny,” and the one-liners are almost surreal in their terribleness (the nadir: a climactic decapitation prompts our Bruce to spout, “You won’t be attending that hat convention in July!”). Yet you have to give it this much: in contrast to your typical summer blockbuster, then or now, at least it’s got some personality.