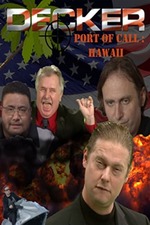 The On Cinema universe is a lot of things, including a gigantic multi-year multimedia commitment. It’s also quietly one of the best satires of conservatism in both the pre-Trump era as well as the entirety of the last four years.

Decker was created in 2014 and Tim Heidecker has acknowledged the character is based on Trump himself (pre-presidential run). This may also be why Decker/On Cinema is one of the only funny Trump satires. The brain-rot dead ending of conservatism had already begun as soon as the Republican Party opened their doors for Sarah Palin as a VP pick. The joke isn’t on Trump here. It’s on everything the right wing has devolved into. 2014 saw the technically incompetent and deeply hateful God’s Not Dead become one of the most profitable theatrical releases of the year. It also saw the year the Democrats lost the senate in what was a bloodbath midterm. The Obama years were coming to an end, and we just didn’t know how badly it was about to reach a conclusion.

As soon as Trump allies were complaining about Twitter censorship after the president was banned for inciting violence, this movie’s hilarious victimhood anthem “Our Values Are Under Attack” started playing in my head. You know. The one where Heidecker sings “Wave a flag on Christmas Day, and they’ll throw you in jail.” In Port Of Call Hawaii, Decker takes every possible opportunity to rail about left-wing values, special interests, and even having a president character to yell at over the phone for being “the worst president of all time.” If you removed the funny people involved in this movie and gave it to say... Cinestate, this would pretty much work as a serious Seagal-Esque DTV movie with conservative ranting.

Decker is also a parody of the technical incompetence of right wing filmmaking. Heidecker’s performance as special agent Jack Decker is half drunken and is almost suspenseful in whether he will even be able to complete a sentence as if they did every scene in one take and called it a wrap. Chroma-key is all over the place. JPGs are prevalent. The special effects make Birdemic look like Avengers Endgame. The cinematography looks like it was shot on an iPhone 4 and they got to rent a drone once in a while. It looks like it was edited by a 17 year old who just learned how to use Premiere Pro at summer camp. It’s almost a work of anti-cinema

Decker has remained hilarious even through the Trump presidency because it knew the idiocy was always there even before this 4 year nightmare. Decker didn’t have to evolve for Trump. This was just ahead of the curve. Even though Decker is a show within a show, the Heidecker character is arguably the funniest journey through the last 8 years of conservatism. From his pro-life stance that he tries to make exceptions for as soon as his girlfriend gets pregnant to his anti-vaccination rabbit hole to his attempt to pivot to info-wars style pyramid schemes, Heidecker’s character may be our best comedic document into the hell we are in now.

Also, I give this five bags of popcorn.