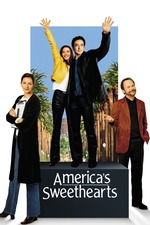 Roberts-Thon has proven that her filmography is all over the place. You have things as good as Soderbergh Collabs (Ok fine there are bad Soderbergh collabs on the list too), the passable-to-good rom-coms, and then you have the bottom tier. This isn’t quite as bad as Eat Pray Love, but it’s in the same league of terrible. At least this is shorter.

There could have been something resembling a funny/passable Hollywood satire here but instead it’s just an impressively unfunny collection of jokes including “oh NOOOO the dog licks peoples balls” and “he’s trying to remove the cactus spikes from his pants but it looks like he is jerking off wow” or shitty ethnic humor. Exactly what you should expect from the auteur director of Christmas With The Kranks / the head of Revolution Studios, or the company that produced this movie as well as other cursed big star vehicles from the 2000s including most notoriously Gigli.

Christopher Walken tries his hardest to be a saving grace here giving a committed performance as a reclusive acclaimed filmmaker, but he gets little to no time to shine here. Instead we’re expected to feel bad for jerks who suck and don’t tip. Who cares?