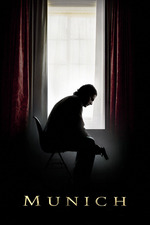 For those who think that Spielberg movies are too sappy, I think I have just the film for you.

In Munich, Spielberg does away with his trademark sentimentality and presents us with a nuanced, yet uncompromising reality. In terms of displaying the longstanding rivalry between Israelites and Palestinians, it would seem easy for Spielberg, Hollywood's most famous Jewish filmmaker, to take a biased view on this complex topic. But don't let Seth Rogen fool you, this is not a self-satisfying exercise in sweet revenge, but a damning condemnation of death and destruction, no matter how righteous your intentions are. On top of that, Spielberg continues to display why he's one of America's most beloved directors. With the ability to pack so much detail and proper setup for a scene into a single shot, it is so good it almost looks easy, which is a commendable feat. His craft of directing knows no bounds. To further illustrate my point, I highly recommend this video. And in front of the camera lies a field of understated performances (not least of which is a career-best performance from Eric Bana). In short, this movie is controversial in the best way possible. Because it forces the audience to ask tough questions about the fine line between justice and vengeance, and how endless cycles of violence drain people of their souls. And is precisely why Munich is one of Spielberg's more forgotten films, but also one of his best. Truly an AWESOME film.